The WAVS team is made up of passionate individuals on two different continents working together to equip young men and women with life changing-job skills.  The WAVS School is run by a talented team of individuals from in and around Guinea-Bissau. Lili Mané first worked at the WAVS School in the summer of 2012 as an English teacher. In 2015, he completed his degree in management studies at The Management Development Institute (MDI) in The Gambia, in partnership with the Institute of Commercial Management (ICM) in the United Kingdom. Lili joined the WAVS School as vice director in September 2015 and was later hired as school director in August 2016.

“I like working at the WAVS School because of the great impact that it is having in people’s lives in Canchungo and the surrounding areas,” Lili says.

Before joining WAVS, Lili worked as a self-employed carpenter and was a public-transport driver between Guinea-Bissau and neighboring Senegal. Lili has a passion for languages. He speaks Portuguese, English, Creole, Mandinga, Wolof, and three dialects of Balanta.
“I came from a humble and hardworking Bissau-Guinean family,” Lili says. “I learned a lot from my family and am using those skills and values in my job at WAVS every day.” Before starting his job at the WAVS School in 2011, Epifanio was a student in the school’s computer basics course. He had heard about the school when he first moved to Canchungo and was looking for a place to continue his computer studies.

Today, Epifanio is responsible for tracking student information, including registration, tuition payments, and grades. In addition, he processes payroll and tracks school finances.

In his free time, Epifaino likes to play soccer. Abe is a former history teacher who had also studied administration at a local technical school. The WAVS School hired him in 2013 to run its photocopy shop and cyber café. Since 2018, he also handled the welding department’s project invoices and managed the steel supply warehouse. Abe’s attention to detail has served the school well as he carries out this important and complex job.

In his free time, Abe likes to play guitar, watch soccer, and hang out with friends. Cirilo loves to build new things – and to teach others to do the same. Often the first one to arrive at the WAVS School in the morning, Cirilo teaches his Welding Department students the importance of hard work and creativity.

“I like teaching new skills and learning new skill in my job,” Cirilo said. “I love to create new products that have a good impact.”

Students in the welding course gain real-world experience by designing and building gates, doors, tables and large-scale projects, such as roofs and playground equipment. The skills they learn help them find employment or start their own business.

“I want my students to understand the most important things in life and to become responsible in their work,” Cirilo said, “I want to give people knowledge and to share God’s love with them.” Moise grew up in a small village in the neighboring country of Guinea-Conakry and later moved to the capital city to study English at the University of Conakry. In 2010, Moise moved to Guinea-Bissau and began teaching French and English. After eight years of teaching in Bissau, he moved to Canchungo to teach English at the WAVS School in 2018.

In his free time, Moise can be found reading and listening to Christian worship music. Dauda began teaching at the WAVS School in 2017. Although originally from Guinea-Bissau, he moved to Dakar, Senegal, to earn his bachelor’s degree in computer management. After graduating, he moved back to Guinea-Bissau and opened a computer service shop in the capital, Bissau. At the same time, he taught at several computer schools in Bissau.

Today, Dauda teaches basic and advanced computer classes at the WAVS School, as well as a new advanced Excel course.

In his free time, Dauda enjoys playing soccer and reading. Marfam grew up speaking French in the neighboring country of Senegal. In 2010, he moved to Guinea-Bissau and began teaching French and Portuguese at a local school. He later enrolled in English and computer basics classes at the WAVS School. Then, in 2018, the school hired him to lead its French course.

When he’s not at the WAVS school, Marfam can be found either teaching elementary students at a nearby private Christian school or swimming in the river. Amona started out working as a fee-collector on public transport vans. After hearing about the WAVS School’s welding program, he decided to move to Canchungo to study welding. After he completed his course, he spent two years as a welding intern. In 2015, the school hired him as an instructor.

Each morning, Amona arrives at the school early to share a short message from the Bible with his students before diving into his welding theory lesson. On the weekends, Amona pastors a church in a nearby village. 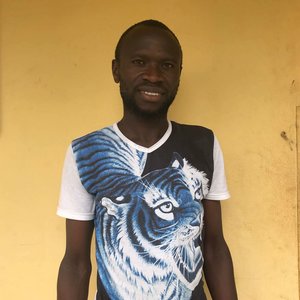 The WAVS School hired Matheus as its security director in 2018.  His responsibilities include controlling access to the school through the front gate, collecting and disposing of trash, caring for the plants, and tracking inventory.

In addition to working at the WAVS School, he is also the leader of the youth group at a neighboring church.

In his free time, Matheus enjoys reading his Bible. Quedam Sau is a true jack-of-all-trades. He worked as a mason for several years, has his associates degree in accounting, and worked as the schools head guard for 5 years. Since summer 2018, he has served as the head of facilities and maintenance. As part of his position, he is learning to weld and do some simple machining work. His favorite part of the job is the hands-on, practical work that he gets to do.

Even before working at the school as an employee, Quedam Sau gave his contribution through helping build the school.

In his free time, Quedam Sau can be found making visits to his friends homes or outside his own home playing checkers with his neighbors.