Latest updates from the Spring 2020 term Once complete, the Bissau campus will train up to 1,000 students a year, provide space for business incubators, and train the country’s future leaders.

Construction started at the Bissau Campus

WAVS has broken ground on the first classroom building at the new Bissau Campus. Despite the lockdown in Guinea-Bissau due to COVID-19, construction is allowed to continue. The goal is to finish the classroom by the end of 2020! The WAVS Schools are not able to start teaching students yet due to COVID-19, but that doesn’t mean the team hasn’t busy preparing! On May 11th the WAVS School Canchungo campus welcomed back its team and they have been busy updating curriculum, participating in team training, doing maintenance repairs and having the occasional team bonding moments! This project not only helped improve the school’s infrastructure, but it also gave the students practical, hands-on experience.

Welding students built a new roof at the Canchungo campus

With the rainy season around the corner, the WAVS School Canchungo campus had a roof that was in need of a makeover. Thankfully the welding students were able to build a new steel-frame roof to shelter the containers, which are full of materials and supplies, before the rain started. Left to right: Mario Djedjo (former WAVS School English teacher), Sloan Galbraith (WAVS Country Director) and Epifanio da Costa (School Secretary) all masked up and headed in to Bissau buy supplies for the school. Supplies are often limited in Canchungo and acquiring them often requires making a two hour drive into the capital to find what is needed. Lili Mane (WAVS School Director at the Canchungo campus- yellow shirt) was invited to the Cacheu Regional Health meeting to represent NGOs working in the region. The purpose of the meeting was to discuss the impact of COVID-19 in the region and what they can do as a community to protect themselves.

Pictured in front of the men are hand washing stations the Department of Health donated for the region’s health facilities. Clearing and grading the land to prepare for laying the foundation of the first classroom building at the Bissau campus. The start of foundation work on the new classroom building at the Bissau campus. The first day of the staff training included a breakout activity called the Draw on My Back Challenge.
The staff broke into 2 teams and formed a line, the last person in line started drawing on the back of the person in front of them. The person next in line had to guess what the person was drawing and draw on the back in front of them. The first person in line drew their image on the wall to show if the first drawing matched the final one. WAVS School Canchungo campus staff together for a team picture after their training. Completed roof constructed by the welding students to protect the two containers of supplies. Thanks to the generosity of donors like you, and a matching grant from One Day’s Wages, the construction of deep wells at the Canchungo and Bissau campuses are now complete.

Both wells will provide safe drinking water and hand-washing stations for hundreds of students each year so that WAVS students can stay healthy during this global pandemic.  See the video below for more details.

The rainy season has started. Guinea-Bissau has a hot, humid, typically tropical climate, with a rainy season lasts from mid-May to mid-November and a relatively cooler dry season occupying the rest of the year.

Thanks to your generosity and a grant from One Day’s Wages, the WAVS School campuses in Canchungo and Bissau now have clean drinking water! Cirilo grew up in a family that couldn’t afford to even pay for his school uniform – much less for a college education.

After leaving home, Cirilo spent two years trying to find a job, but without job skills no one would hire him.

Then Cirilo heard about a nine-month welding course offered at a WAVS School. He eagerly signed up. Thanks to One Student members, the tuition was less than $10 a month, which was affordable for Cirilo.

After graduating, Cirilo started his own business and now runs a welding workshop with the help of seven apprentices – one of whom he’s even paid to enroll in the same WAVS welding course that he completed.

Today, Cirilo earns enough money to support his parents and pay for his siblings’ school fees. Thanks to his training and hard work, Cirilo has successfully traveled the path out of poverty. ‘None of us are professors, secretaries or doctors – but I thank God for the profession he’s given us.’

Cirilo grew up in a country where most people live on less than $2 a [...] Bruno’s dreams evolve with his vocational education from the WAVS School.

In West Africa, a vocational education can make dreams a reality. As a little boy [...] Fatherhood awaits ‘Papa.’ But how will he provide for his family?

Thanks to the opportunity Papa received to study welding at the WAVS School, and a [...] 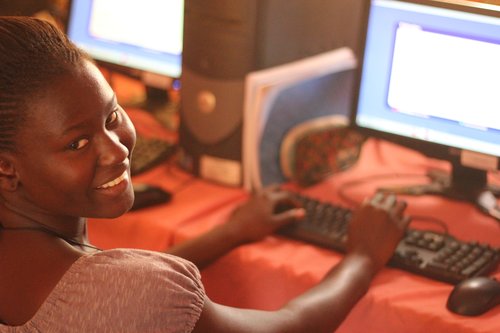 GET THE LATEST UPDATES FROM WAVSSubscribe to WAVS News & Stories to receive the latest news, photos and video updates.