Jesus loves the poor – but what does that look like? Here are 6 Bible verse about helping the poor – and what they mean for us.

The Lord cares about someone’s heart – not their financial status

Of the rich and poor present in the story, Jesus exalts the poor widow who makes a greater sacrifice rather than the greater contribution. God’s heart is not for the quantity of what we have, but for the heart behind which we give from. Those who live in poverty are not cut off from Jesus, rather they are exalted and pointed to as a role model when they serve him.

The passage also provides another reminder: all people have gifts and talents to offer the world – regardless of their financial status.

2. The Parable of the Great Banquet

All people, including the poor, deserve a place in our lives – and in our homes

Jesus doesn’t just call us to serve those in poverty, but to engage with and live in community with them. Providing for someone’s physical needs should be coupled with genuine relationships and invitations into our homes and lives. Jesus didn’t just heal the crippled, the lame, and the blind – he also sat, ate, and spoke with them.

Jesus also calls us to give without hope of repayment here on Earth. But when we build relationships with those in poverty, we can expect to be blessed with friendships, new outlooks on life, a fresh perspective, and a closeness with Christ as we model our lives after his.

Those who overlook the poor are scorned

It can be easy to forget about people’s needs when we are surrounded by luxury and have all our physical needs met. Even the needs of the people who may be right outside our doors can easily be overlooked when we are distracted by maintaining our own comfort. The rich man lived in luxury everyday and just outside his gate was someone in need who he had the capacity to help. Rather than focusing on using his prosperity to help others, the rich man pursued earthly comfort at the expense of spending eternity with Christ.

4. Jesus was born into poverty

Jesus spent time with the wealthy, but he came to come to earth as a humble man. He was born in a manger (Luke 2:7) and his adoptive father was a common carpenter (Matthew 13:55). At Jesus’ purification ceremony, his parents presented two doves instead of a lamb for an offering (Luke 2:24). Though lambs were the ideal offering, doves were allowed as a substitute for those who could not afford one (Leviticus 12:8). The son of God himself came from a family without the financial means to complete the level of requirement for a sacrifice. The Lord not only loves the poor, but can identify and relate to those who are scraping by.

5. Man with leprosy is healed

Those with leprosy were excommunicated from town and were left to beg for food and money. Jesus willingly crossed the divide and interacted with, touched, and healed lepers. Rather than looking at the poor and seeing the person as nothing more than their needs, Jesus looks and sees their potential. When we work to help others, we can do the same.

Never-ending charity can make poor people look like nothing more than charity cases. And eventually, poor people start to see themselves as being defined by their needs, instead of their potential as fellow human beings.

When we are asked to help a person in need, the first thing we should consider is this: Will what I do build this person up to their full potential, or am I just reinforcing the perception that I’m the giver and the other person is the receiver?

We’ve found a few ways that help break this unhealthy dynamic: build encouraging relationships with poor people, find ways to give them new opportunities in life, and train them in a new job skill that allows them to fulfill their own potential.

WAVS vocational schools in Guinea-Bissau equip young men and women in West Africa with life-changing job skills that allow them to work for a brighter future. One Student members give monthly to help keep tuition affordable and ensure that student receive a quality education.

6. Jesus condemning the love of money

Let us be clear, God’s heart is not against those with wealth. As long as money is not an idol or source of reliance and dependence. In fact, Jesus relied on many affluent people to help propel his mission forward. The houses he stayed in and people that fed him were all people with money that they used to bless others. Jesus even spends much of his time on Earth eating with tax collectors and wealthy pharisees. When he condemns these people it is not because of the existence of their wealth, but their love of it. Those who do have money are called to use it as a way to serve God, rather then serving themselves. Jesus sees the hearts of those uncorrupted by wealth and rejoices.

When we invest our money in helping people and sharing the Gospel, the impact of our investment can be life-changing both here on earth and for eternity.

We believe that Jesus changes everything: how we live, work, and love others

We know that it is not our work that saves us. But we also know that our works allow us to display and share our faith with others. When we love the poor, we reflect Jesus’ love for others.

One way we’ve been able to do that is by meeting the practical needs of people living in poverty in West Africa. At WAVS vocational schools, students are equipped with life-changing job skills that help them to work for a brighter future. At the same time, WAVS teachers build authentic relationships with their students. These relationships allow them to share a simple truth: Jesus changes everything – how we live, work, and love others. Ultimately, this truth leads to hope for eternity. ”Eat your dinner. There are starving children in Africa!” … so our parents told us [...] How international nonprofits use your donations to help people in poverty

When you click “donate” to buy school supplies for a kid in Africa, to help [...] 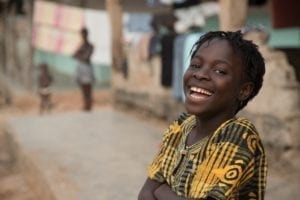 How to help people in poverty: Donate to nonprofits that give OPPORTUNITY, not CHARITY.

For a long time, nonprofits have tried to help people in poverty through charity – [...]